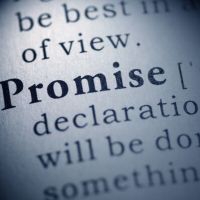 What do you mean when you make a promise? What is the difference between a promise and a vow? If you break a vow, does that mean you won’t keep your promises?

These are questions that often haunt my divorce mediation clients. They come to mediation hoping to disentangle their financial life and create a co-parenting plan in a non-adversarial way, yet may have questionable levels of trust between them. Each party claims they can be trusted to abide by informal agreements, but may be hesitant to believe the other person will be as capable.

I usually explore their “trust factor” early on by asking each of them, “On a scale of 1 to 10, with 1 being minimal trust and 10 being complete trust, how would you gauge how much you trust the other person to abide by agreements if made in mediation?”  Of course, there are couples who have mutually decided to amicably divorce and come to the process with high levels of trust between them. However, more often than not, at least one party assigns a low level of trust to the other party. A track record of broken promises or, more significantly, broken marriage vows, has contributed to the end of the marriage and brought them to my office.

Webster’s Dictionary defines a promise as “a declaration or assurance that one will do a particular thing.” Rising to another level, a vow is defined as “a solemn promise”, synonymous with an oath, pledge, or commitment. What they both have in common is that neither requires a signed document to create the pledge. Yet, the result of breaking a vow or promise can be extremely detrimental to a relationship. Trust is now in jeopardy, creating a significant barrier to the future stability of the partnership.

Does a broken promise, or worse, a broken marriage vow, mean that the offending party is incapable of committing to divorce-related agreements in good faith without having every agreement memorialized in a written signed document? “Good faith” is defined by Webster’s as “honesty or sincerity of intention.” Can someone who broke a solemn marriage vow now be relied upon to keep a simple, interim agreement made during mediation? Can they still be honest and sincere? How can trust be rebuilt?  What kind of accountability should be expected? “Good faith” is a key component to their success.

If they commit to mediation, we then explore the different levels of memorializing their agreements based on their levels of trust. These are:

I’m happy to report that my mediation clients have never opted for the Temporary Court Order option. Most clients, when challenged, want to prove to each other that they are capable of keeping promises and holding trust despite past challenges. They are eager to establish a new kind of relationship so they can dissolve their marriage on better terms than what caused them to part, especially if they want to respectfully co-parent their children. Although all final financial and parenting agreements are memorialized in legally binding required documents at the conclusion of their case, the majority of their “mini-agreements” made along the way are made in good faith. Mediation provides divorcing parties the opportunity to rebuild trust while encouraging keeping promises through posiative feedback and accountability.

If you’ve reached a decision about separation or divorce, Felicia Soleil can help.  Through her practice, Family Law Resolutions, you can achieve an outcome that fosters both a compassionate ending to your union and a healthy new beginning for you and your family.  Her goal is to help you focus on moving on, rather than simply moving out.  Felicia can be reached at 253-853-6940.  All consultations are strictly confidential.